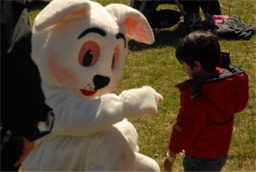 The Children's festival is the largest fund raiser for the Great Falls Optimist Club with proceeds benefitting children locally. This is a great inexpensive family outing!

Thank you to the many volunteers who come out every year to help with the festival, whether it's stuffing eggs prior to the event, or setting up, and cleaning up the day of the festival! These are the ones who make it a success!

"The festival began as a way for Adeler Jewelers to thank the community for its support", said Wendy Adeler Hall, whose father began the celebration over 30 years ago. "He's very community minded and in fact as been the main proponent of the new Grange Foundation Project", she said.

There are four age groups for the egg hunt at 4 PM: 8-10 Years to the north of the green, 5-7 years in the middle, 3-4 years to the south of the green. The Toddlers and younger are free to pick up eggs near the festival rides and games during the festival 1-4. The children 4 and younger can have one parent with them, the older ones will be only allowed on the green by themselves. Parents can watch behind the ribbons.

The eggs contain candy, but some of the 8,000 eggs will contain gems donated by Adeler Jewelers. "We usually hide about $5000 of gems mixed in", Adeler said. "Typically the gems include amethyst, garnet, peridot, blue topaz, citrine, some rubies and emeralds, all the typical birthstones", she said.

In addition local vendors have sponsored rides, like a moon bounce, a mini Ferris wheel and a tilt-a-whirl for the children to enjoy. The $10 per child admission gives each child a bracelet that's good for unlimited rides and the egg hunt. "We don't charge the parents admission, but they're free to make donations", she grinned!

Great Falls Youth Rugby is excited to have their local Optimist Club as one of their partners and is gratefull for their generous contribution to their cause.

Great Falls/McLean Youth Rugby Club is a 501(c)3 non-profit youth co-ed rugby club that plays in the fall, spring and summer months with close to 30 other clubs in the Rugby Virginia league.

The Fall session (ALL AGES) runs from the end of August to the end of November, culminating in our own MedStar Benefit Tournament.

The Spring session (ALL AGES) runs from the end of January to May, culminating in a State-wide tournament.

The Summer session (ALL AGES) begins with pre-season clinics in May and continues to an all-team tournament during the last weekend of July.

Great Falls/McLean Rugby was created to fulfill a void in the Great Falls/McLean/Reston/Herndon/Sterling/Ashburn area for youth rugby.Rugby is fast, fun and safe and as the newest Olympic sport it is catching on with kids across the country who can now see games on television and want to get their hands on a ball. Rugby is fun! Give it a try! More info at www.rugbyVA.com

Great Falls Little League's softball and baseball programs serve the majority of the geographical area within the zip code of 22066. See our website for more details.

We offer a quality baseball and softball program for youth ages 5-16, including the levels of T-Ball, Coach Pitch, AA, AAA, Majors, and Seniors.